While the first major polio epidemic in the United States occurred in Vermont in the summer of 1894, the earliest cases of the virus in Marin were reported by the Mill Valley Record in 1945. In the first half of 1954, at least 60 polio cases were reported throughout the county. Dr. Jonas Salk had developed an early version of his polio vaccine in 1950 but it was three years until the National Foundation created an advisory committee specifically to promote the possibility of conducting a field trial in the United States to test its efficacy. In April 1954 the Vaccine Advisory Committee approved a field test of Salk’s vaccine that was organized, initiated and funded solely by the March of Dimes. 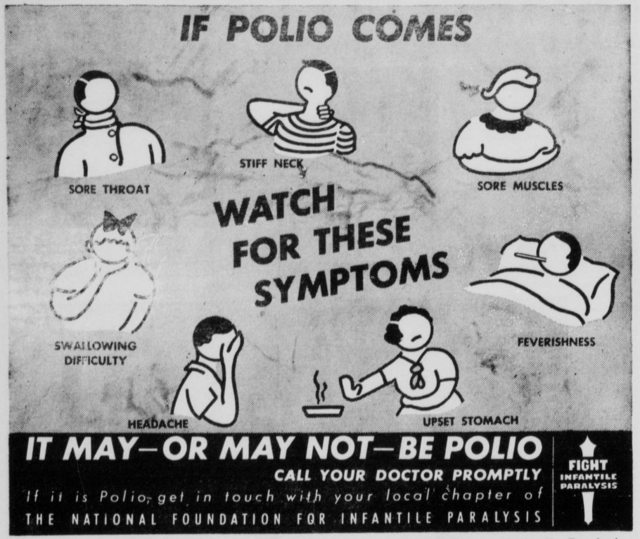 On April 12, 1955, after one year of analyzing results and determining its success, it was announced that the Salk vaccine was proven 80-90% effective. The U.S. government licensed Salk’s vaccine that same day and by June 1 -- with parental permission -- Mill Valley’s first and second graders were receiving it. Notably, inoculations in Marin came to a halt in May after vaccines manufactured by Berkeley's Cutter Laboratories were found to be tainted but Mill Valley was able to carry out the program in June as planned. Immunization was administered by volunteer teams of doctors and nurses working throughout the county. The Parent Teacher Administration (PTA) worked with parents so that they would be informed about the prospective polio vaccination. PTA members also assisted with transporting children to the schools selected as vaccination centers and assisted with keeping records. About 4,500 children received the vaccine during this initial rollout.

1957 was the first year Salk’s vaccine was widely available and in February of that year California’s Governor Goodwin Knight and the State Department of Public Health expanded a state-wide program of polio vaccinations. With this new program, age restrictions changed to offer vaccinations in health department clinics to those under 40 resulting in over 8,000 shots given per month in Marin leading up to the summer. Local businesses also played a role in incentivizing immunizations, with San Rafael’s New Haven Shop giving away free records autographed by local celebrities upon a patron’s showing of their polio vaccination certificate. While successful, the Marin County Health Department estimated that by July 1959 only 50% of Marin residents who needed the shots had not yet had them. Of 20 persons randomly questioned by the Mill Valley Record, 13 had taken no Salk vaccines at all. The report explained that those questioned weren’t against the idea; they just “hadn’t gotten around to it.” Interestingly, the parents who were surveyed confirmed they had made sure their children had been immunized despite the fact that 40% of the previous year’s polio victims were adults. A few years later, Dr. Carolyn Albrecht, Marin County’s Health Officer, recalled that “people were inclined to think this was a disease of childhood, but experience has shown that nearly half the cases occur in adults.”

In 1961, a state law passed that required polio vaccination for school attendance which led to an increase in shots being given. When the law went into effect on January 15, 1962, proof of anti-polio inoculation of all minor and adult pupils attending California public and private primary and secondary schools was required. Schools were required to revise registration programs to keep track of all polio shot records and use that information as a basis of admission to the classroom. The law called for the organization of immunization programs by every county health department in California and Marin expanded its schedule to assist parents in meeting the new legal requirement, which resulted in 2,137 individuals receiving the Salk vaccine at clinics during the month of July 1961.

While Salk’s was the first polio vaccine, it was not to be the last. Similar to the efforts to develop a successful COVID-19 vaccine, other scientists were simultaneously working on other approaches. Dr. Albert Bruce Sabin took a different direction, developing a live virus vaccine that came into commercial use in 1961. Easier to administer -- three drops of the vaccine on a lump of sugar (to help the medicine go down, of course) -- the Sabin oral polio vaccine was put into widespread use in the United States in 1962.

That same year, Mill Valley and Southern Marin medical teams -- along with a reported 8,000 volunteers and civic officials -- prepared to join in the largest immunization drive in the history of the West. Called “K.O. Polio” for the Sabin vaccine’s promise to “provide the final knock-out blow” to the virus, the event was ultimately labeled as “the greatest cooperative effort ever seen in Marin County.” Over 1,000 PTA members phoned households in Marin to remind families to take the vaccine during the drive while other volunteers distributed information and pre-registration forms to supermarkets, businesses and professional offices. Teachers and school administrators sent the pre-registration forms home with nearly 40,000 school children so families could fill them out in advance to save time at vaccine stations. Marinites even received the forms with their milk deliveries. The Mill Valley Record also published the forms in its papers leading up to the September event along with interviews with medical experts answering questions from concerned citizens, as well as information about clinic locations. A nominal donation of 25 cents per person was requested but vaccines were given to anyone unable to pay for them. 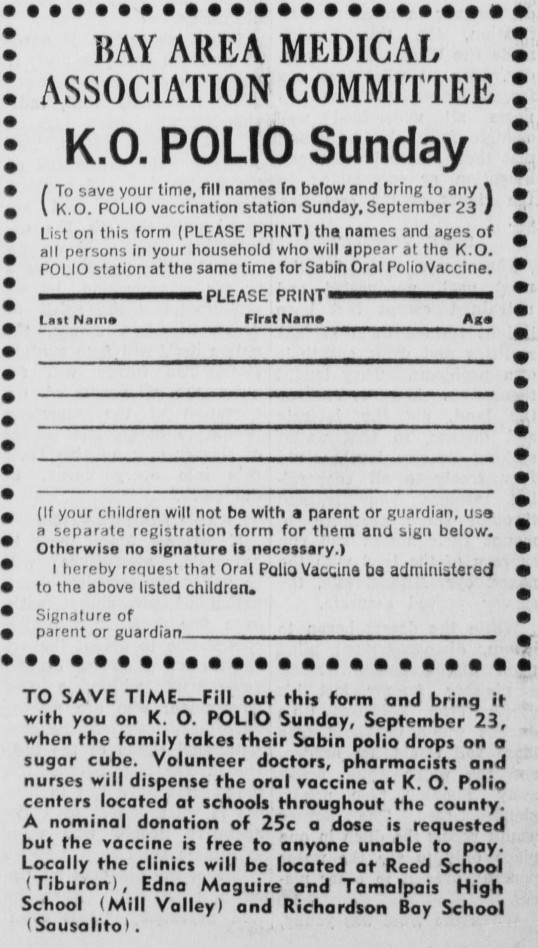 September 23, 1962 marked the first of three “K.O. Polio” days in the county, the goal of which was to administer doses of Sabin’s oral vaccine to 3.5 million Bay Area residents via pop-up clinics in each Marin locality. 5,907 individuals took the vaccine at Edna Maguire School while 10,268 vaccines were administered at Tamalpais High School. Follow-up events were held on November 4 and December 9, 1962 but on November 7, 1962 Bay Area doctors reported “victory over polio” with 88% of the county having received the vaccine. By the end of the “K.O. Polio” campaign an impressive 2,537,700 Marinites had taken those spoonfuls of sugar. 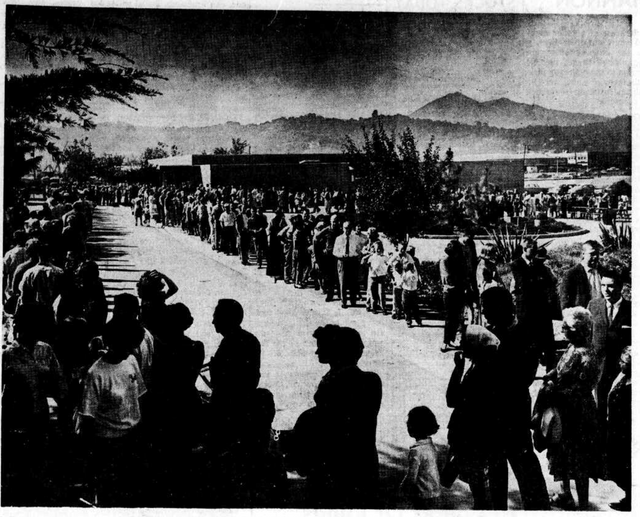